Surprise! I have a new book coming out.

I have a new book coming out. It’s called The Short Second Life of Bree Tanner. Well, it’s more of a novella than an actual book—my version of a short story.

Actually, this has been a surprise to me, too. The reason why it’s a surprise was that I never intended to publish this story as a stand-alone book. I began this story a long time ago—before Twilight was even released. Back then I was just editing Eclipse, and in the thick of my vampire world. I was thinking a lot about the newborns, imagining their side of the story, and one thing led to another. I started writing from Bree’s perspective about those final days, and what it was like to be a newborn.

This story was something that I worked on off and on for a while, just for fun, in between the times I was writing or editing other Twilight novels. Later, when the concept for The Twilight Saga: The Official Guide came up, I thought that might be a good place for Bree. Her story is a nice complement to Eclipse; it explains a lot of the things that Bella never knew. So I dusted it off and finished it up for placement in the Guide.

At the same time, it came in handy for the Eclipse film. Melissa (Rosenberg, the screenwriter) had a ton of questions about what exactly was going on in Seattle, how Victoria managed things, what Riley was like, etc. I let her read what I had then, and later gave the whole thing to the director, David Slade. David asked if Xavier, Bryce, and Jodelle (Riley, Victoria, and Bree) could read it as well, so all the parties involved would end up having a really strong foundation for their characters before the cameras started rolling. I was pleased that this side of the story would make it into the film and was looking forward to including it in the Guide. 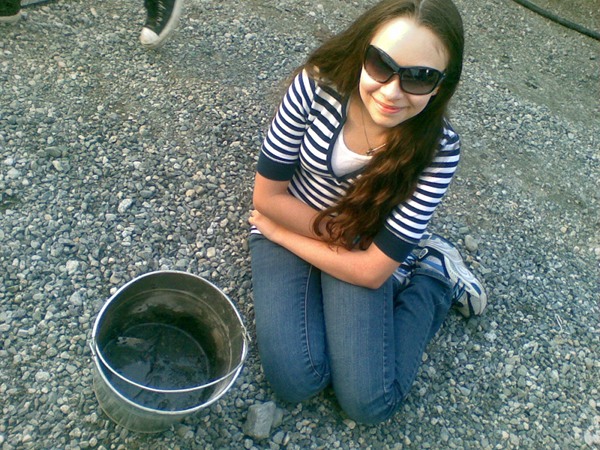 (Keeping it confidential: Here is Jodelle next to the bucket of waterlogged ashes that were once the pages of her copy of the Bree manuscript.)

Then I got the news: my “short story” was nearly 200 pages long when typeset. It was too long to fit into theGuide—without ending up with a tome as heavy as the Oxford English Dictionary. My publisher approached me with the idea of releasing the Bree story on its own. One of the major benefits of this plan was that it would be out before the movie, so people would get to know Bree before they saw her in the film. That made sense to me, and we decided to go ahead with it.

There was one thing I asked for: since this story had always been an extra for me, and was meant to be released with the Guide, I wanted to be able to offer it to my fans for free. You all have bought a ton of my books, and I wanted to give you this story as a gift. My publisher was awesome and embraced this idea. We still wanted to also produce a physical book with a cool cover (see below) that you can add to your set if you like, but starting at noon on June 7th until July 5th, it will also be available online at www.breetanner.com.

One other aspect of this release is the plan to give a more important gift to people who really need it. One dollar of each book purchased in the US from the first printing will be donated to the American Red Cross for their relief efforts in Haiti and Chile and other parts of the world where people are in great need. We’re going to have an option online as well, so you can choose to make a donation if you want when you read the story online. I hope you will. I think that we can really help a lot of people with this.

I really hope you all enjoy this story. I had a blast writing it. I’m glad that after all this time cooling her heels in my files, Bree finally gets her chance to shine.

Thanks for all the support,