Be a Twilight Storytellers Fan Correspondent!

Now that we know the six Directors who will be making the “The Storytellers — New Voices of The Twilight Saga” short films, it’s time for YOU, the fans to get involved. Since the beginning, Twilight has been about the fans and their love for these characters. Time and again, I’ve been blown away by your continued support and wanted you to be involved in this next step. We want fans to to enter to win a trip to the sets of the Twilight Stories short films and be our Fan Correspondents where you’ll report on all the behind the scenes action! 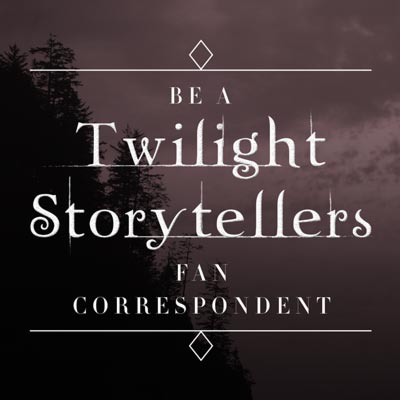 Not a director or writer? We need you too! Enter the Fan Correspondents content to be part of “The Storytellers — New Voices of The Twilight Saga!” It’s super easy, all you have to do is make a short video (15-60 seconds) explaining why you’d be perfect for the job. Enter using the contest app or use the hashtag #TwilightFan. We’re picking regional Fan Correspondents to cover the filming of each of the six Storytellers films from a Twilight fan’s perspective. If chosen you’ll be sent to the set of the Twilight short films to chat with the filmmakers and see what goes into making a short film! To learn more about how you can be involved or submit your video go to http://bit.ly/TwilightFan for full rules and details. You have until Monday, April 13th to enter, get recording!

See you on the set!